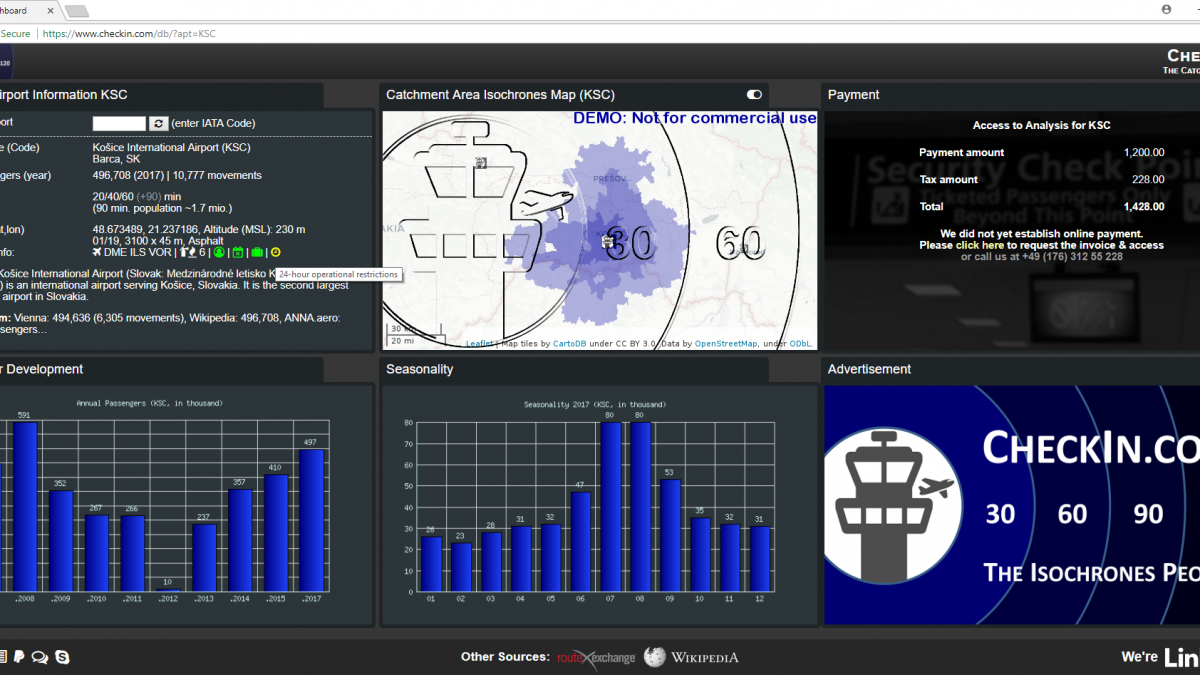 Almost three years since our launch, we could not make CheckIn.com a full scale business.

We knew that targeting airports would not justify the development and were confirmed – airline use is more than 10 times of what airports use our tool. Unfortunately, the majority use is access to our free data. Approaching the existing users, they have no money for such information, though they confirm the value in their day-to-day life. Even a SVP Network Development of a large airline, praising me for the unique value of our tool, knowing from the analysis we keep maintaining for him, that many airports use false “facts” for their catchment areas, confirms he compares with our data as an indicator to the quality of the airport data. But nevertheless he expects the airports to deliver the (biased) information. “In the end, it’s a look in the Crystal Ball”. Expressing the fact that he does not understand the value of good data, even for the look into that Crystal Ball. Garbage in – garbage out.

Unfortunately, only the network departments of the smaller airlines frequently access our airports, but we suffered some painful losses on the larger airlines of which two have started to use our data. The large airline having recently expressed some interest and receiving some “combined” analyses, now having turned down the discounted flat offer we made. Such we decided to unregister the company and run it as a personal side business only. Yulia takes care of that, I will focus on other projects and only help on demand.

If you need know how in airlines, airports, specifically corporate strategy, marketing and distribution, disruption management you might want to talk to me… The latest addition to the quotes collection:

Okay, so I am again looking around for a new consulting assignment or a permanent job. Having helped Yulia to establish CheckIn.com, we are about to finish the work on the dashboard redesign supporting route level analysis and have first (successful) tests of the related analyses, so we’re confident to have those before Winter.

As my readers know, I am not “academic”, as far as it is about a university degree. “All I have” is a three year business education in Whole Sale & Foreign Trade Economics with a German Chamber of Commerce degree, similar to the integrated degree program. Which poses a hurdle finding a decent job in Germany. Not so easy if you don’t “fit the box” of a cogwheel. Being creative, interdisciplinary, a fire fighter, doesn’t make the fit into a box any easier.

Should you happen to seek a creative campaigner, do talk to me please ツ

But I just happen to look at some quotes that keep popping up on LinkedIn…
My preferred one for many years: Both Steve Jobs and Bill Gates didn’t finish university.Still, there are people like Marisa Meyer at Yahoo (former Google), disqualifying good and successful people only because they didn’t graduate… Recently I read former German Minister for Scientific Research Heinz Riesenhuber saying “The only difference between German Trainee program (Berufsausbildung) and the Dual Study system is that only the latter gets a university degree.” Having qualified after three years with a non-university degree in Whole Sale & Foreign Trade Economics, I’ve worked at the edge of creative developments and shared my knowledge as guest lecturer at universities. I’ve been speaker at international events. But i.e. at Lufthansa I don’t even have to apply as they demand a university degree; might be agriculture at that I am told…

This statement be Robert Kuok, the richest man in Malaysia fits a quote by Steve Jobs, late founder and brain behind Apple.com: As I mention frequently in interviews, most of my business life I was hired as a fire fighter. Sometimes I was allowed to change things and usually then those things succeeded. At other times, I was hired as the scape goat. Just recently … Naaaw. Let’s not dig into that open wound ツ But being the eternal optimist, I learned that there’s a solution to any problem.


Extinguishing fires for the past 30 years turned me into a creative, interdisciplinary but optimistic aviation expert with my own network of aviation experts helping me where I get stuck. It allowed me to speak at top level aviation events on IT, business travel, analysis, usability and design, A-CDM (operations), marketing and other issues. Frequently about how pieces fit into the puzzle. As a consultant, I’m called to oversee projects in aviation that sometimes impose a lot of change to the people. Related mostly to marketing, analysis, distribution, operations, interfaces and other such issues.

So these quotes above are simply examples, making me confident that I will find my next challenge where I can make a change.