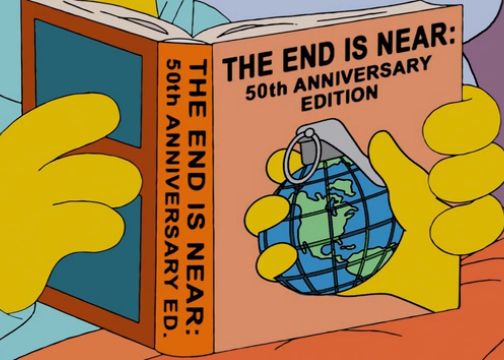 Looking at the above graph, taking World Bank statistics and a preliminary 2019 number by IATA, we can see that the upward trend in the past has never been disrupted beyond a year or two, the impact on annual passenger numbers has always been marginal. Though thanks to the increasing hysterics by media, politicians and also our own lobbyists, we may have some recessive impact. But even then, we’re complaining on an extremely high level. If you just look at the steep rise of passenger numbers, it is interesting how seasoned and well educated managers took and keep taking growth for granted – and once there is a setback they fail to have answers and show how the neglected disruption and crisis management. In Times of Crisis – Think Positive! Just stop it, will you? Yes, we are in a time of crisis. But as outlined in my recent post, it is nothing new! While I can understand press, media and politicians to steer panic, they love aviation bashing, also expected some of the airline managers to abuse it to cover up for their own mismanagement, I see too many articles from my analytical friends, focusing on Italy, China, today about Trumps ban for EU (Germany)-U.S.-flights and such feeding the panic, instead of focusing on the realistic sides of the impact of Corona virus/Covid-19 to our industry. In Times of Crisis – Think Positive!

So, our job in aviation is to work against the hysteria. Promote positive news. Distinguish market impact like Trump’s hysteric reaction, Italy closure or China from the other markets, explaining the dynamics more specific and not like that major airport recently claiming a 30% (overall) impact without further detail. But with a large share on flights to/from China, Italy. Another lesson I learned back decades ago is the title of this post: In Times of Crisis – Think Positive!

That does not mean to turn a blind eye on what’s happening, but it means to focus on reality and promote on the brighter side, ease our fears and counter the panic-making! Emotionally, the media loves to steer panic, politicos are targeted to cash in on fears. As an industry, we must counter those publications by expressly focusing on the good news, bring realism into the game – both factually, but also – and this is very important – emotionally!

I have no f***ing idea, what those aviation managers and those aviation marketing teams learned? Obviously nothing about the very basics of their business…? They’re hiding, trying to sit the crisis out, feed the media with negatives. But we must turn this and steer it showing the underlying optimism of our industry that this will be temporary (as always) and we will succeed and come out of the crisis stronger than ever. Emotional messaging.

That’s a basic in marketing: In Times of Crisis – Think Positive! This reminds me all too much about Supertramp’s 1975 album… Crisis? What Crisis?

So instead of looking on the downside, always look at the bright side of life (another classic, thanks Monty Python – oh yeah, I get old). So while Corona impacts your Italian business, how does your other markets look? While low cost airlines increase the ticket prices (…) to cover for a drop in passengers, they still fly. And once the panic ebbs down, they will likely come out stronger, as I predict that they’re not stupid enough to drop their prices without reason back to pre-crisis levels.

We must also emphasize that the global economy does not work without aviation. Or shipping. Yes, there is an overall impact and we are in rough waters, but for the ones who have prepared themselves for the seven good and seven bad years, we will have to ride out the storm. Use it to our advantage! But stop that whining. Show faith. Smile in the face of disaster. In Times of Crisis – Think Positive!

At all events – can’t think of any where that wasn’t the case – I hear someone talking about the negative reputation our industry has. Instead of understanding the value of flight services, politicos and local media use any opportunity to discredit aviation. As dirty, loud, unsustainable. But next day, they book their next flight.

For years, I keep promoting to outline the positive impact of aviation. While they apply greenwashing to rail, they neglect that the large rail systems rely on the power grid, in which only a part is “green” to date. But yes, aviation failed so far to promote and turn to biofuel (greenwashing) or better SynFuel. Only Hamburg Airport was recently in the news on signing an MOU with Lufthansa on development of Synfuel, using surplus energy from the Northern German windparks. I keep asking ADV and BDL for some facts on the noise carpet, so far to no avail. Aviation claiming that the airplanes got quieter. Why can we not take some historic look at the overall traffic i.e. at Frankfurt (not on a single flight only) and compare from the 1980s in 10-year-steps to 2020?

At 9/11, there were stories out there, how the contrails, the bad contrails, slow global warming, reflecting sun-heat from reaching the ground. Why does aviation not cash in on such facts? We’re not only bad for creating clouds, actually, we do good too. But with aviation lobbying groups in hiding, keeping their heads down to avoid bashing, sorry, they do not do their job well. They’re just a sort of self-serving VIPs that fail to show their pride in their industry. And then they wonder, why the aviation bashing keeps on. Take a stand. Offense is the best form of defense (German proverb). Especially in times of crisis: In Times of Crisis – Think Positive!

Yes, this is a call for action. If your press & PR is on the negative side, you can hire me for brainstorming on how to turn things around. The rules of engagement are simple. Yes, it takes a constant focus, not to fall to the trap to follow the flock, to a defensive stance, to duck and cover and try to sit out things. But that’s simply wrong. To turn things and public opinion around, you got to make a stand. Promote emotionally the value of aviation. Don’t get me wrong. At first sight, I sometimes felt the same. But I was first airport manager to response to H1N1 on German public television, to the Ash Cloud too. It happened on the weekend and all my “peers” at other airports went into hiding. I went out to the airport. Talked to the press. Explained. I was utterly surprised to be told on Sunday (the news surfaced Friday afternoon) by German national TV ZDF, that I was still the only airport manager available for comments, statements. No, I’ll never forget that. Since, I have a clear focus on who and when aviation managers respond.

Recently it was all too quiet for all too long about Corona. Instead of a bold step forward, my peers are hiding, duck away, cover their asses. Better not to do anything, not to be blamed later…? And if I read that single statement by ADV about Corona, I could puke. Bla. Bla. Blubber. An emotional nightmare. Now hidden behind climate, climate and politico. Ignore, neglect, duck and cover. That is not positive standing, that’s hiding! And that is just one example, the same applies to all the lobbying groups that I’ve looked at.

And if you do have a negative message, your job in Marketing and P.R. is to give it a positive spin. What good do you expect to come out of it? Look out to past the crisis, how do you expect to recover and what do you do to keep the impact for your travelers (“the public”) small? Marketing 1-on-1: Never end with a negative message! Never. Ever. And no, don’t use yellow-press subjects to your mails or headlines either! The name of the Virus is Coronavirus SARS CoV-19.
SARS not being a stranger, neither are disruptions. Aside the hysteria shown, which we must challenge emotionally and factually by pushing positive news. Not by pouring oil into the fire!
https://foodforthought.barthel.eu/2020/03/parable-of-the-seven-good-and-the-seven-bad-years/
It is fascinating to see many of the big players struggling, screaming for help. Lesson NOT learned.
I would appreciate [lobbycompany] to take a responsible stance and question hysteric political decisions. Accept the challenge. Not duck, cover and resign. Look at how quickly the situation reaches normal and how to survive until then and how to recover quickly. Don’t look like the mouse into the eyes of the snake, but seek how to come by the imminent threat. THAT is our job.
Respectfully – Juergen

In Times of Crisis – Think Positive!

It is our job to overcome the crisis. Any airline manager calling for state aid or other help, failing to steer their “ship” through the crisis is the wrong person to manage an airline. In Germany, we call them summer-day-managers. They can “manage” as long as the waters are calm and fail miserably as soon as the ride gets a bit rocky. And those likely are the same managers who cause airlines failing.

Corona is not as bad as media and politicians try to make us believe. Yes, it is bad. Not as bad as the ordinary flue. Nor as bad as human-to-human killing. Or as mortal as street accidents. And we should have learned from earlier setbacks. 9/11, SARS, just to name the recent big ones. Oh. SARS. Again, Corona’s real name is Coronavirus SARS-CoV-2…

Don’t duck and cover. Take a stand. In Times of Crisis – Think Positive! And show it!
Don’t beautify, white- or greenwash. Stay real. Focus on an emotional, positive messaging. But speak up!