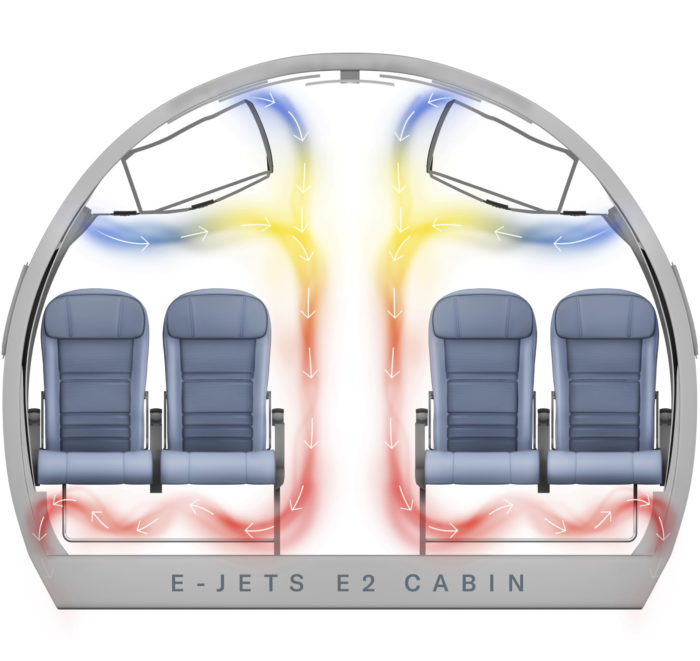 Recently, there are some assumptions surfacing, that on the one side “feel” good, can and should be used to subside passenger concerns. But as an industry, we must ask ourselves, are those more Placebos or are they real? How save is flying really in times of Corona (or future pandemics)?

And what does that mean for recovery? And that future? At first, there was the idea voiced to use the large grounded aircraft, like Boeing 747 or Airbus A380 as pre-equipped hospital wards for recovering Corona patients. The argument was, that the air inside the aircraft would be more save than a typical hospital room.

In hindsight, this airflow is based on the running engines and flight. How the air flow differs when the aircraft is connected to a ground power-unit has been very much ignored.

The first image I’ve seen and shared on LinkedIn was the aircraft cabin of a large aircraft. Shortly after, Embraer offered the image I use here. Which also does not show the real air-flow as it ignores the personal air jets above the seats, which could be opened and directed to blow the air between the seats down. This way, the air flow from the windows to the aisle seat would be disrupted. Alas, those jets usually are limited in their direction and focus on the passenger’s face. Today on a news special, one of the leading German virologists remarked that even giving the high throughput, it is a comparison of apples and pears. while in the operation room there is space, this is a total different issue on a crowded airplane. And if someone coughs on an airplane, the aerosoles stay about four minutes in the air, way time to infect people. And existing studies he referred to confirm that i.e. one single coughing Tuberculosis passenger infected 11 passengers in the surrounding seats.

So is it safe? Semi-safe? Placebo? I’d say, something in between.

But in Marketing and Public Relations you do learn, not to lie. So it is safe to say that aircraft air is filtered more than the air in a hospital operations room. Neglecting the fact that in the hospital, there are not hundreds of people on short distance. One development striking me totally futile was the Asian carriers coming up with full body suits. If I’d be a passenger on any of their flights, it would give me the signal that they do expect passengers to be unsafe. While they “suit up”, they leave us with a face mask to our fate? And sure, it is in clear contradiction to any “news” about HEPA-filters or safe air flow!

While I understand the idea behind it, it is a very clear case of cognitive dissonance by their airlines’ managements. And if you do protective wear, why not disguising it into normal uniforms. Add gloves, use FFP2 mask. Give the flight crew Google Glasses to protect their eyes from a direct virus impact. That one, not only I consider a Placebo. Aside the fact that it reduces aircraft seating capacity by 33 to 50%, in turn resulting in substantially higher ticket prices. A 180-seat Boeing 737 or Airbus A320 becomes a regional 120-seat aircraft. An 100-seat regional aircraft, already tough to operate at competitive cost looses even more seats, more likely 50% of the seats. And size is an important factor in the low-cost airlines’ model. Marketing, selling and operating a 180-seat aircraft follows different rules than a 120-seat aircraft. 20 unsold seats are no longer 90% load factor but 80%. The higher the ticket prices, the less attractive the flights become. Though on the other side, if  (a big if) all airlines are required to such reduce their capacity, they will adjust. Until there is a vaccine. Else, I have mentioned that so often before. When I learned my basics, years ago, before Internet and Corona, there was a IATA-standardized procedure to book the seat next to you as empty. So why don’t we ask IT to (re-)implement that functionality into the online booking tools? The GDS and also the owners of the travel agencies could and should promote the function to the travel agents! Until the “tools” make the function available, that gives the travel agents a USP. An especially valuable ones in these times!*

A sneeze can easily transport the virus through the space between the seats to the row infront, deflect from the seat infront to reach out to the passenger across the aisle or empty seat. And why is it, that I did not find a picture of “empty seat” in combination with “face mask”? Placebo.
_______
* My latest AIRIMP is the 2006-version. Extra seat procedure on page 15, chapter 2.6.14: EXST for extra seat, CBBG for use with special cabin baggage, code to be used as first name and inside an explanatory SSR. Other “ideas” I can actually only consider amateurish. Whereas the first ever response I saw about it came from a purser (head of cabin crew), questioning the escape procedures if all that Acryl is in the way. Such protectors also require more space, forcing a complete interior change, on an A320 or B737 likely changing from six seats a row to five.

Then what about families traveling? Mothers with (very) small children?

But best was that reversed seat, a doctor commenting being awed at the perfect scenario to sneeze not at the seat back in front of you, but right at two faces…?

It does strike me very odd to see experts for cabin interior not only coming up with such ideas, but those ideas spreading through the posts and shares of seasoned airline managers. Think before post? That all those ideas are mere Placebos becomes apparent not only to our industry, but also to the public, as such pictures make the rounds, showing that passengers boarding or leaving the planes do not keep the (social) distance, but crowd the aisles, push and scramble.

Even before, most airports use “minimum space” to “host” the passengers before boarding inside the gate area. But can airports simply increase the space to improve the “social distancing”? It works well to use two or three adjacent gate rooms in times of low traffic, but once traffic picks up: Crowded terminals again. And meanwhile, reports from my airport friends confirm that the passengers crowd in the area of the assigned gate… Not keeping any “safe distance”. German DLR researches the virus spread on trains and aircraft, but without taking filters into account. That is “academic”, misleading and a disservice.

Given all those media jumping on stories like the empty middle seats, face masks, then also on reality biting like the crowded gate areas or aircraft aisles during boarding.

Then I read about the ideas of IATA, ERA and other lobby-groups, not disqualifying Placebos, but jumping the train – another disservice to our industry! While it helps to push forward positive news like the cabin air flow, we must, as an industry, understand the limitations we are faced with and make some realistic decisions, start negotiating and coming up with some real developments. And promote those to the media.

There are some open questions, our industry should address. Not wait until we have to, but proactively. And not in a hysteric activism, but sound, commercially viable and reasonable. Can the airflow be managed to create an air flow pillar between the individual seats? To reduce the air spread between the seats and reduce the spread?

Can the air-recycling be switched off in times of crisis?

Can we publish the rules and regulations for exchange of the HEPA-filters?

2. Use of Masks for Coughing Passengers (and Crews)? Can we add an industry regulation demanding use of FFP2-face masks for any coughing passengers throughout the flight? And who pays? Can we ban flight crews from duty if they are infectious? Or even if possibly infectious? We must secure that their income is not threatened from such a security measure or they will be motivated to subvert the rule.

What about gloves? You can’t force such on any longer flight, right? But how do we deal with infections that are transferred through simple touch? And no, acrylic shielding is not the (quick) answer. But it is a question to aviation interior design to offer solutions. And we should add this to standard uniform in times of spreading pandemics. How can we, how can the aircraft makers improve the airflow management on the Ground, when using APU or GPU but not the main engines air flow system and where “Pre-Conditioned Air” (PCA) is not available?

And is there a schematic, which shows how PCA links into the cabin air flow?

So far PCA is only available at big airports using terminal facilities. Is it possible (or available) and viable to have mobile PCA-units at airports? And to make PCA use on ground mandatory? How can we change the check-in to boarding process to support social distancing? And not in “low demand”, but once demand picks up to the old levels again? I recall pictures of crowded check-in, security, airport shops and other infrastructure – to the gate rooms and aircraft aisles.

I saw that interesting report where they separated the passengers on departure from the aircraft, only to then see them crowded standing on the boarding bridge and escalators. While the crew did a good job, the airport obviously failed miserably. Just as the idea to leave the middle seat empty – smart on the above aircraft with a 2-2-seating – these are mostly more Placebos. If you sit in an aircraft, next to an infectious passenger, you are likely to get infected. Are you at added risk, such as I am, you likely want to avoid this, at least until a vaccine and proper treatment is available. Like for the flu. If you are not at added risk, you may feel that travel is safe enough for you.

Before Corona, there were already other viruses in the wild, such as Measles, Malaria, Polio, Ebola – even HIV*, for which we still have no cure. And people were and keep traveling.

_______
* HIV: I was questioned on LinkedIn about the comparison to HIV. But many people forget the hysteria that went along HIV. Celebrities like Freddy Mercury concealing his. A movie called Philadelphia addressing the issue. Still, HIV was known as being in the wild – but people kept flying!