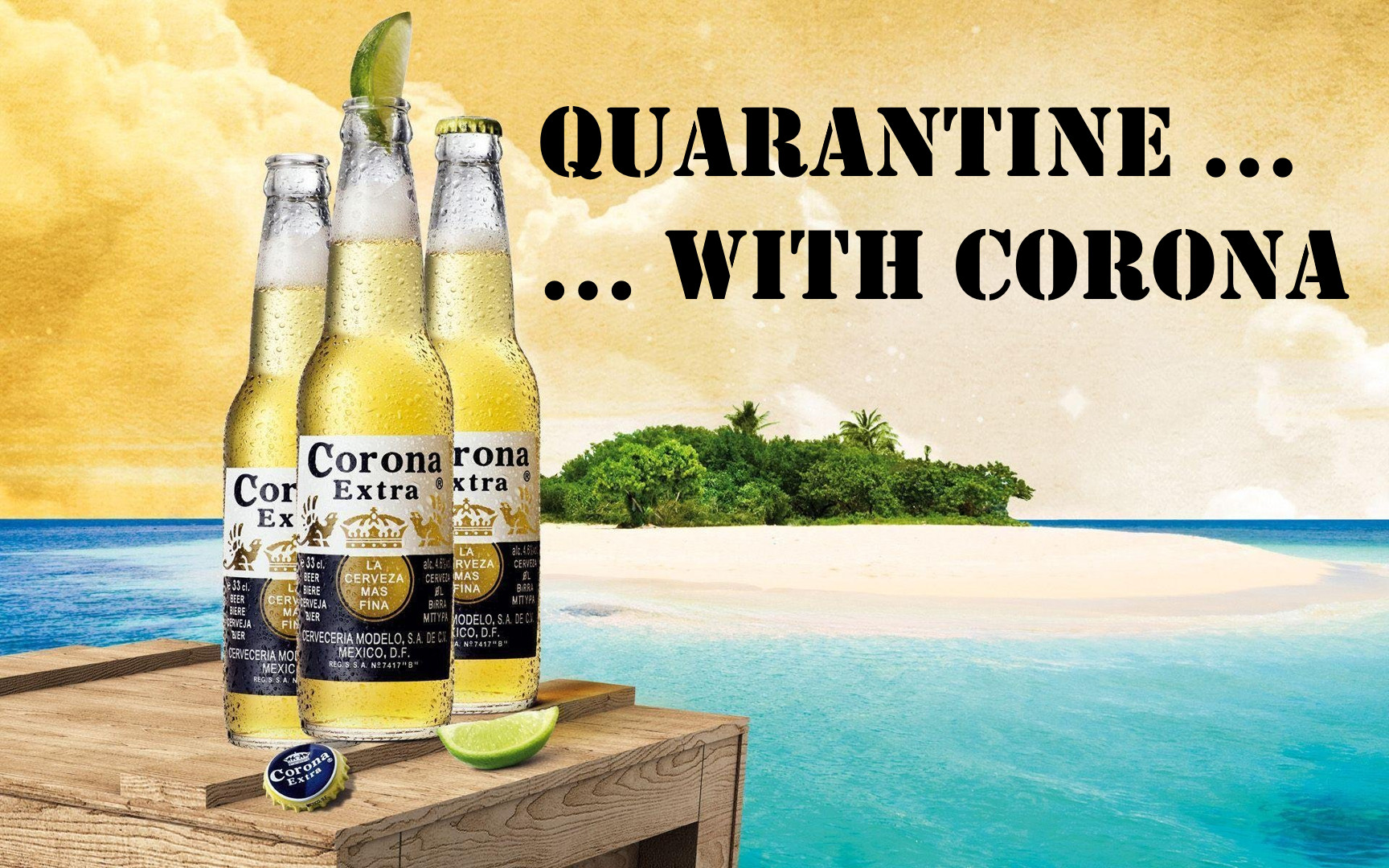 There is a lot of political indecision, followed by panicky hyperactivity. Let’s stick to the facts, think and prepare!

The incubation time is 14-20 days. WHO says we missed the opportunity to contain the virus. So now we face a minimum two years for the virus to spread around the world. That’s WHO and other experts. But you cannot disrupt the economy for two years. Now in Europe, the politicos closed down their countries, called for quarantine. Not yet in Germany and reports come from all kinds of places of people gathering in parks, touristic places and the cities – ignorant of any possibly spreading of the virus. Saint-Florian’s Principle: Oh holy dear Saint Florian, don’t burn my house – take the neighbor’s one.

While the politicians in Germany talk about a voluntary shutdown until Easter, same in France and other countries enforced, German state Baden-Württemberg in fact closes down all non-essential business until 15 June. That’s the written legislation. Politicos talking about Easter lie. Period.

A current study by the Imperial College in London, German national TV prime time news Tagesschau refers to, expresses that radical steps are required for several months at the least to keep the situation under control.

So, as mentioned WHO and other experts say two years, as we can only slow down but no longer contain the virus. And then there are those statistics, that talk about #flattenthecurve. What the media does not say, if you flatten the curve, the time line gets longer. And while Washington Post showed a rather small increase in time – realistically we do talk about a year at the very least. But.

A vaccine is said to be available sometimes between fall and the beginning of next year. Until it is available on a global scale, we talk about 9 to 15 month. Then, the pandemic will be under control.

Is it Really that Bad? Another report I read today with references to all different countries health experts questions the “mortality rate” of Coronavirus SARS CoV-19.

The number of tests vary greatly, a large, a very large number of patients having none or very little symptoms, usually not even being checked. Yes, where others are being checked false negative, the test being more like a pregnancy test. Only the positive result is 100% accurate. But. Where a lot of infections are identified, the mortality rate is below 0.1% or 1 ‰ (per thousand). Where only symptomatic patients are checked, the mortality is substantially higher with about 3% (per hundred) and up to 20% of the infected being severe cases requiring hospitalization. Overall, the values are very much in line with former outbreaks of similar viruses (SARS 2003, H1N1 Swine Flu, H5N1 Bird Flu, etc). So why the uproar this time? So in fact, there is a lot of panic that the hospital cases exceed the capacity – and there is truth to it as Italy, the French Alsace or other “hotspots” proof. We also have those idiots, especially in the hotspots being naturally big cities, that ignore the demand for self-quarantine, happily spreading the virus. But there are no “hard numbers”, the experts still have no real clue, what makes someone infected a risk patient. So after a first ignorance of the situation allowing it to go out of (their) control, both, the medical luminaries as well as the politicos try to play it safe. Whereas the latter tiptoeing around, such as German chancellor Angela Merkel calling for an obviously insufficient voluntary self-quarantine, whereas the neighboring countries already enforce it. Or shutting the borders only, after most neighboring countries did before.

You simply can’t cripple commerce like we do now for a year or longer. So our political Powers-That-Be (PTBs) have no choice, but together with the industries, commerce, medical experts they got to square the circle. A strategy that brings together all the different needs. Let economy recover, limit the sick cases and treat the more severe ones properly.

In my humble opinion, the situation is blown up, messed up royally, by media, social media and indecisive PTBs. It is out of control and they try to give an image of themselves of a control that they lost weeks ago. On the other side, the more we learn, the more likely we will learn that the situation is not that much different from previous crises. There will be mathematical models on how many new severe infections. The less severe ones or ones without symptoms will be simply ignored. But by the time they open up commerce again, there will have been fatalities. Not just human ones, but many, too many in my opinion, commercial and economic ones.

P.S.: German Definition: A “circle” is a square that got cut on all corners and ends. While China today celebrated that they overcame the epidemic, experts question it. In the originating province Wuhan, while they reopen factories with great show and publicity, the streets remain empty, anyone not needed in the factory to restart their economy still in quarantine. Squaring the circle. Bringing medical situation and economic necessities together. Risking lifes and a new increase in infections, but a rather calculated risk after their severe and enforced quarantine.

I find it quite revealing, how all people on today’s reports about this wear facemasks…?

Startups & Funding in Times of Coronavirus

Allow me to change direction in the blog post. Today I attended a webinar by my friends Frederico, the project director of the Global Investment in Aviation Summit (GIAS) and Olga, Founding Partner and aviation investment brain at Polish Oruga Group. In short, I found two things noteworthy. More like in a sidenote, they confirmed the problems with aircraft funding, many loosing money now. As you may know from me, I already questioned over and again the business case for Airbus A320 or Boeing 737 families ownership lease and funds. It’s a shark pond and I don’t see any USP if you start up an airline with an aircraft everyone has in surplus. There was just recently an article on CNN confirming my opinon.

And I don’t either think it is wise ever to invest into a single cogwheel of a complex machinery like aviation.
As I keep emphasizing now for more than 10 years, especially on my summaries of due diligence work: If you want to make profit in aviation, you got to change the game!

And which brings me to the second issue I took along from the webinar today. Didn’t I just address them? Oh, that was pre-Corona, that’s old, isn’t it? Why Do Airlines Keep Failing? And not just airlines. There were several ideas. But also comment by both my moderating friends. “Classic” Thinking. And I do wonder, why I so often instantly fail to see a USP. Maybe investors love to invest in “what they know”. Or better “what they see others do”. But those are the investments I see failing. But while we do seek the launch investor for a really unique, profit focused, socially responsible and sustainability focused aviation project – why is it so difficult to find the investors with a bit more vision, seeking those pebbles in the sand? If you want to invest, I think our questions we answered are the ones any investment should be able to answer: What’s Your USP? Do you Know Your Cost? Have you done your homework? Is the SWOT analysis realistic? Right now, you must be able to get an answer to a Corona Worst Case Scenario, right?

If you know investors … or someone knowing investors … interested in a business that is sound, risk-minimized, unique in many ways, profit focused, but also focused excessively on social responsibility and proactively on sustainability … Not white- or greenwashed, you know how much I despise such … Please refer them to me. Or to Kolibri. What annoyed me quite a bit is how the dinosaurs stake their claims demanding bailouts, rescue programs, etc. – IATA demanded today $ 200 billion? The three main alliances joined forces demanding rescue? This is a “global crisis”, it’s not just airlines. And typically, the big ones should have the funds and the means to secure their survival. It’s the small ones that need help. But why should mismanagement, missing crisis management and missing preparation for the crisis be rewarded? Calling for help to me in this situation reflects a form of egocentric greed that simply makes me puke. Sorry, if you’re not a startup but you can’t survive a shutdown for some weeks or even months, what have you done in the seven good years?

I believe that we will face eight weeks minimum “quarantine” measures. Maybe those indecisive PTBs keep trying to cover their butts until beginning of summer. But they cannot shut-down commerce forever. Or for any longer length of time. I believe we will see early June as start of the economic recovery. Billions will be burned by then, hundreds and thousands of good businesses gone bust, the dinosaurs (not just in aviation) having cashed in on the “rescue programs” and bailouts. Life will go on and however and wherever it will find us, we’ll survive a well.

In Times of Crisis: Think Positive! and keep in mind the parable of the Seven Good and Seven Bad Years. Don’t panic or fall into despair. We’ll be there.

And to close with a positive spin…